Manufacturers and users of LED lighting applications need to be assured that their products will be qualified according to a multitude of reliability and efficiency standards. In addition to voluntary initiatives and programs like EnergyStar, mandatory standards and specifications for the lighting industry must be kept in mind during project development, including the latest IES LM-79-19 and the ANSI C82.16 documents.

This article gives an overview of relevant lighting standards and specifications for LED lighting products. It also describes the features of Vitrek’s test equipment, including the PA900 power analyzer — featuring built-in lighting specifications — as well as Vitrek’s electronic DC loads and hipot testers. These portable testing devices, with their selectable touchscreens and other user-friendly features, allow engineers and technicians to easily confirm that their LED lighting products meet the necessary parameters for performance, energy efficiency, verification and safety — before the products are sent to testing facilities.

Over 40 years ago, during the U.S. oil crisis, the Department of Energy (DOE) established the Energy Policy and Conservation Act to compel manufacturers to develop products meeting certain efficiency specifications in order to save energy, including those for solid-state lighting (SSL) products. The focus of this white paper is on the mandatory standards/specifications for the LED lighting industry. The following sections discuss the IES and ANSI mandatory standards, as well as the voluntary initiatives and programs that lead to certification and the product labeling (e.g. EnergyStar) that indicates compliance.

The IES LM-79-19 Standard and Specification for SSL Lighting

Updated in 2019, the first time since 2008, the Illuminating Engineering Society’s (IES) LM-79-19 is the standard and specification for solid-state lighting applications. In addition to specifying optical measurements (lumens, chromacity, luminous flux, etc.), the LM-79-19 has stringent system efficacy specifications. For the LED lighting applications, the relevant parameters fall under “AC Power Supply Standards” (sections 5.1-5.3), including:

As shown in Figure 1, the LED driver can be integrated into the LED lighting fixture itself. In this case, the input power coming into the luminaire’s LED driver (power supply), as well as its output power, must be measured using test equipment to compute system efficiency (Figure 1.)

Updated in 2015, the American National Standards Institute’s (ANSI) C82.15-15 is a mandatory standard and specification for the methods and measurement of LED driver input and output parameters. This includes:

In addition to mandatory EIS and ANSI standards/specifications, lighting products can be tested to meet voluntary national and state certification programs and initiatives that enable energy savings. These national and state programs/initiatives have different objectives and requirements, each with precise measurements and unique submission requirements to assure compliance. The ones that deal with LED lighting applications include:

When an LED lighting product completes qualification for one of these programs/initiatives, a label appears on the product packaging to show that the specification has been met (e.g. light output per Watt, etc.)

The international Electric Commission (IEC) provide international standards that bring together the agreed-upon set of rules, specifications and terminology that allows manufacturers to have their devices tested for conformity. (The Vitrek PA9xx series of Power Analyzers has built-in EN50564 specifications for standby power and harmonics, which will be discussed later.) The following specifications are relevant for testing LED lighting systems:

As is apparent from the previous sections, there are four areas of parameters covered by industry standards as listed below, for LED lighting products. Therefore, to assure they will eventually pass UL, TUV, Intertek and SA testing, engineers and technicians should analyze these parameters during each phase of product development.

Vitrek’s test equipment has years of proven effectiveness for the lighting industry. The devices described in the following sections are used to test LED lighting applications by measuring the performance, energy efficiency, verification and safety parameters needed for compliance testing and certification. 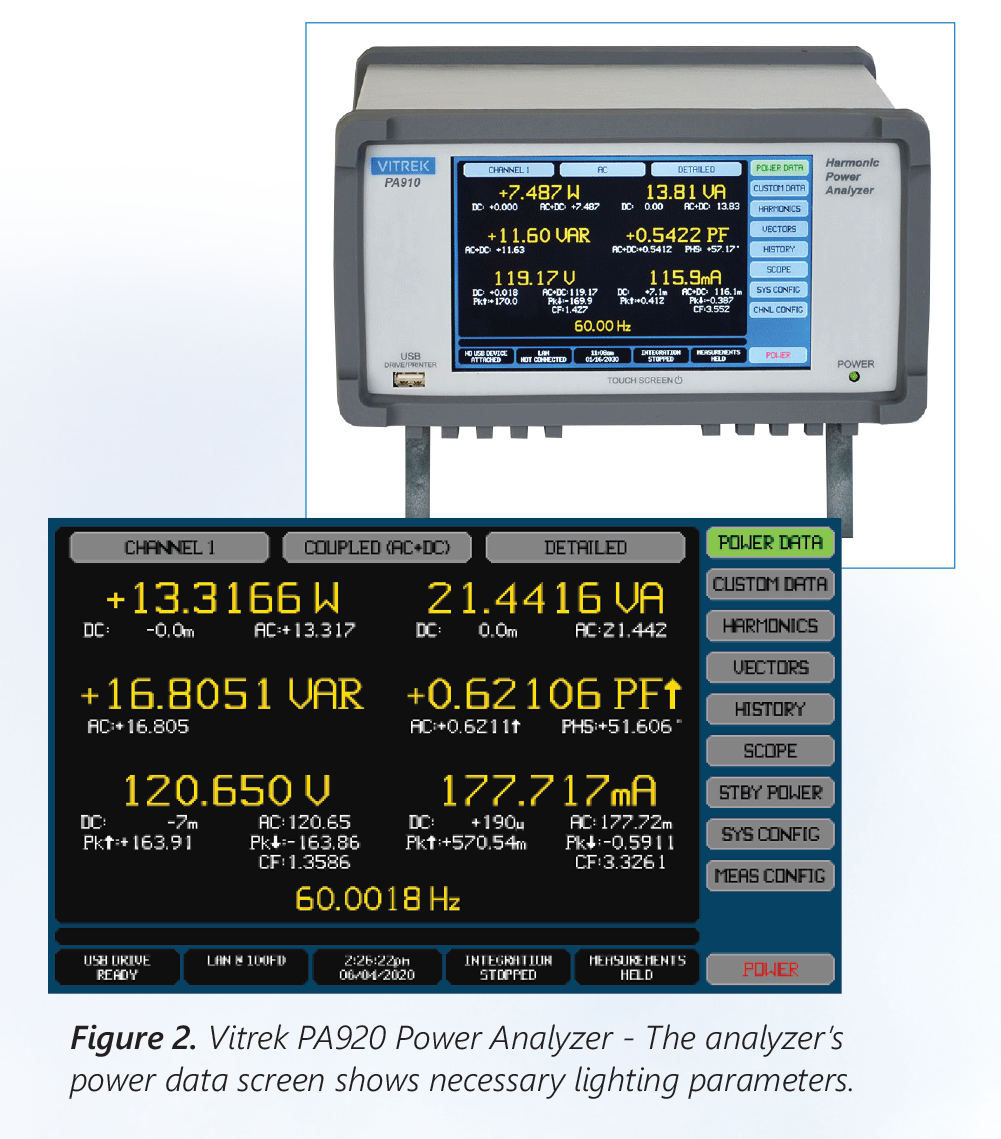 The compact, small-footprint, lightweight PA9xx device is easy to handle. They meet the updated LM-79-19 specifications for the higher K-2 accuracy requirements.

The Vitrek power analyzers work as a virtual power analyzer (VPA) by connecting one to four channels, as needed. By providing the ability to integrate separate power analyzers into the same instrument, the device essentially makes each channel into an individual PA channel.

In the following example (Figure 3), the PA is hooked up to a LED Luminaire to test LED driver efficiency to make sure the product meets specifications for compliance. The back panel of the power analyzer in Figure 3 shows two of the channels. On the LED driver side, the input to the LED driver is a 120V AC input signal and output is DC signal (typically around 10 volts.) 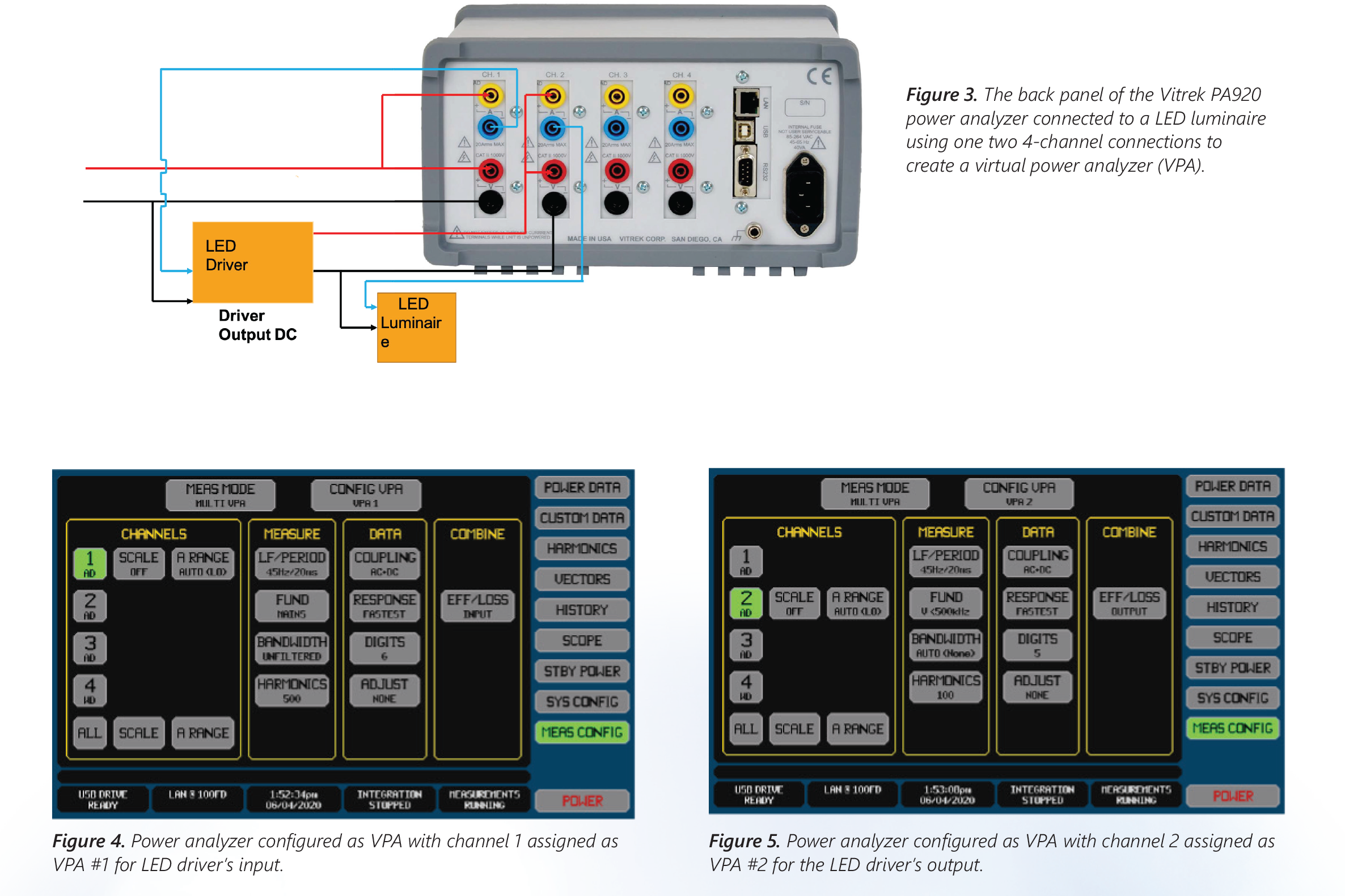 As illustrated by the screen in Figure 5, the LED driver’s output is assigned as channel 2, displayed as “CONFIG VPA2” on the top-right (purple square.)

Configuring the device to show different parameters is done by using the touchscreen to toggle between display screens. In this way, the PA9xx makes it simple to calculate output/input power of the LED driver by showing output, loss and driver efficiency, as shown in yellow in Figure 6. 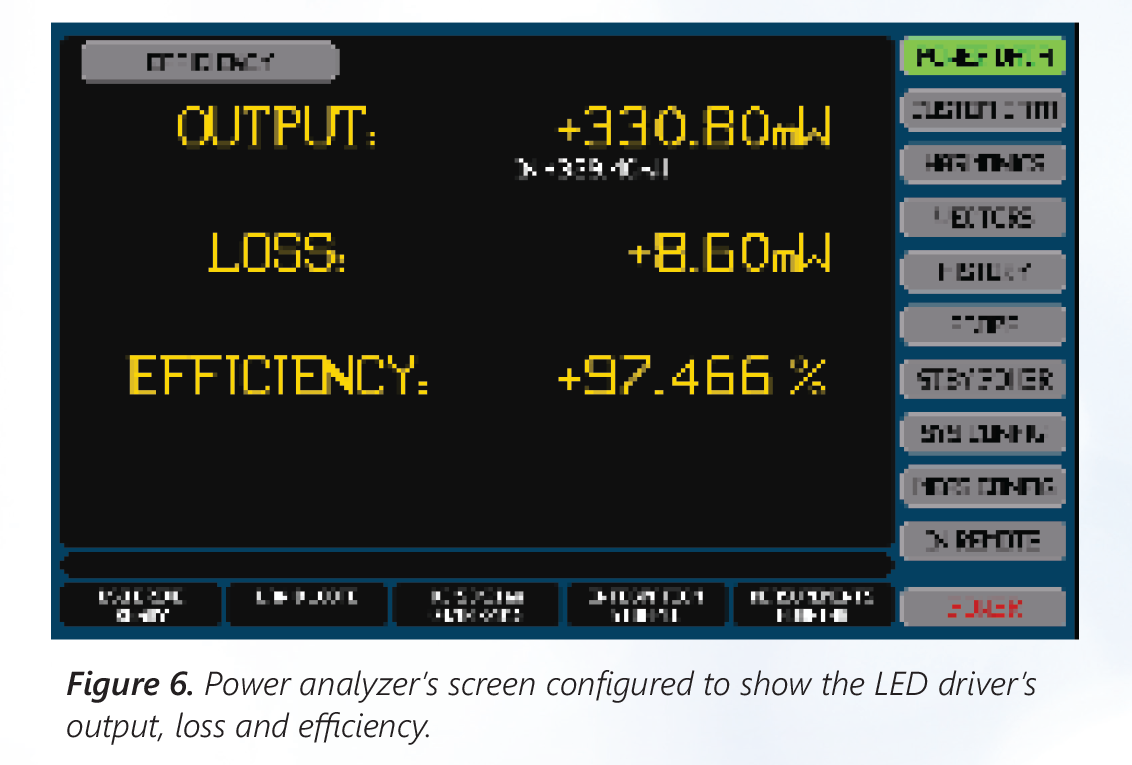 To simplify LED lighting compliance testing, the Vitrek PA9xx family of power analyzers has the portion of Energy Star’s EN50564:2011 5.3.2a specification for standby power built into the unit (Figure 7, in the purple “configure” button at the top of the display). In this example, the analyzer is hooked up to a smart LED lighting fixture. The user can touch the standby power button (right side, in green) hit the power button (bottom, red) and push start to see standby power in volts, etc. displayed on the screen. 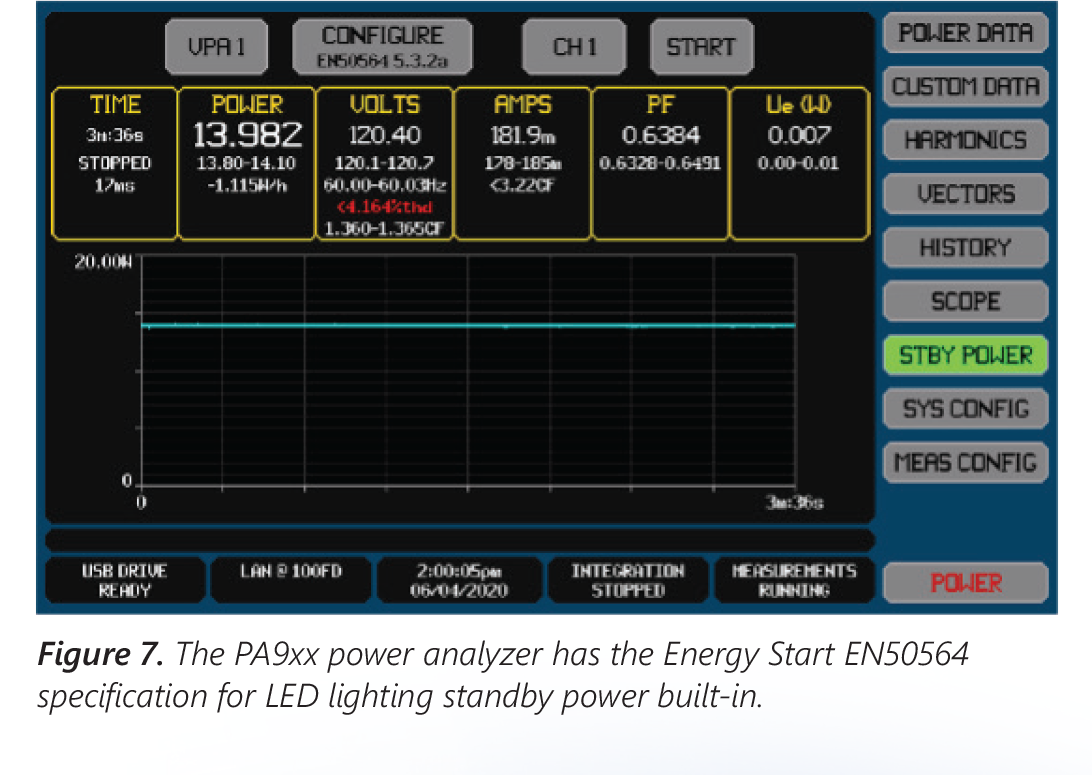 Similar to the standby power feature, the PA9xx family of power analyzers also have the AEN61000-3-2 and 4-7 specifications for harmonics built into the units. It allows the user to select which classification of EN61000 3-2 is displayed (Figure 8). As shown in Figure 9, the red “tick” marks on the harmonics screens indicate that the LED lighting device is failing the harmonics testing for the required Class A harmonics levels.

The harmonics screen on the PA920, PA910 or PA900 power analyzer displays up to 500 harmonics at a time, even at aviation frequencies.

It also provides scope mode and cycle mode screens to display ripple and cycles when calculating LED lighting measurements as seen in Figure 10a & 10b. 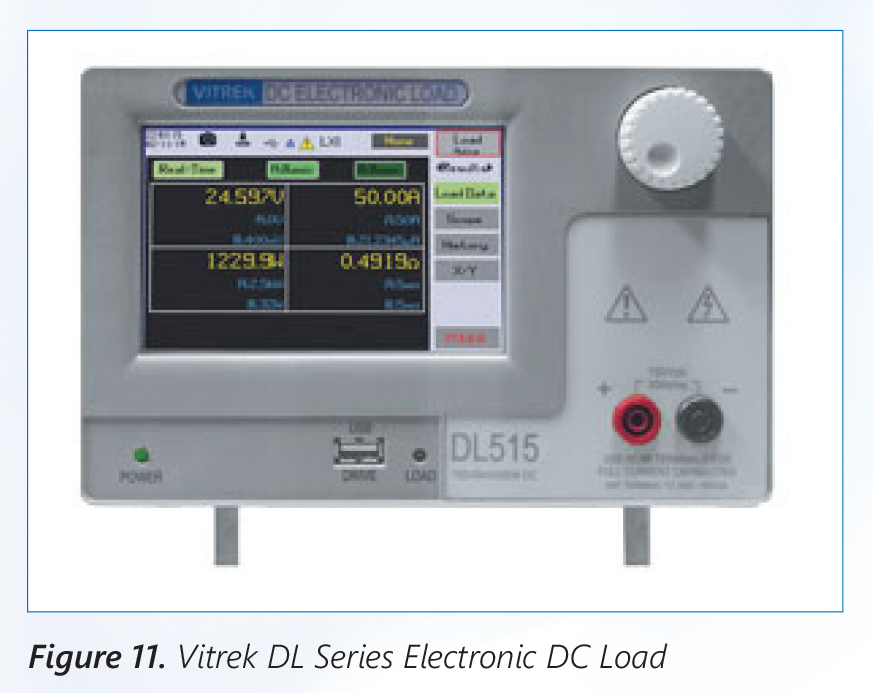 Vitrek’s DL Series Electronic DC Load is used to check performance and energy efficiency parameters for LED lighting during the project’s design and production phases of development. LED drivers, the power supplies for LED lighting applications, need to maintain a constant current even if the load increases. Compact and portable, Vitrek’s programmable DC load (Figure 11) can be used where the LED application is installed to detect if current is stable and luminous intensity (luminous flux) stays within reason even if the load changes. The DL Series Electronic DC Load is available in six different models with three different voltages and wattage levels. 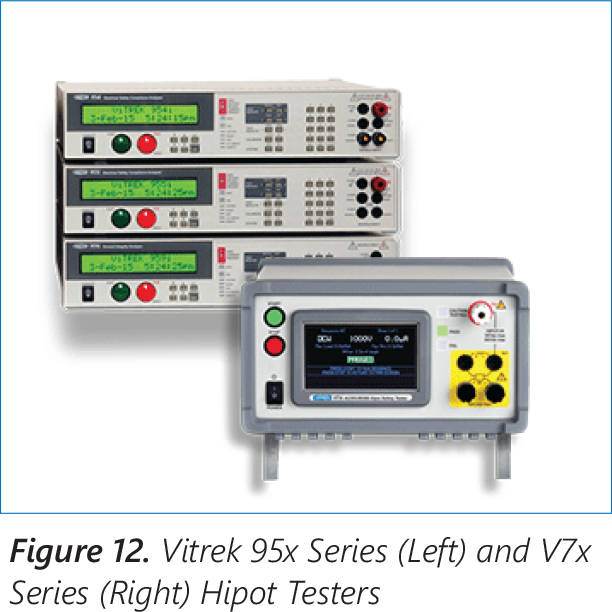 Vitrek’s hipot testers (V7x series and 95x series) can be used during the final production testing phase to make sure a LED lighting product will pass safety certification testing. 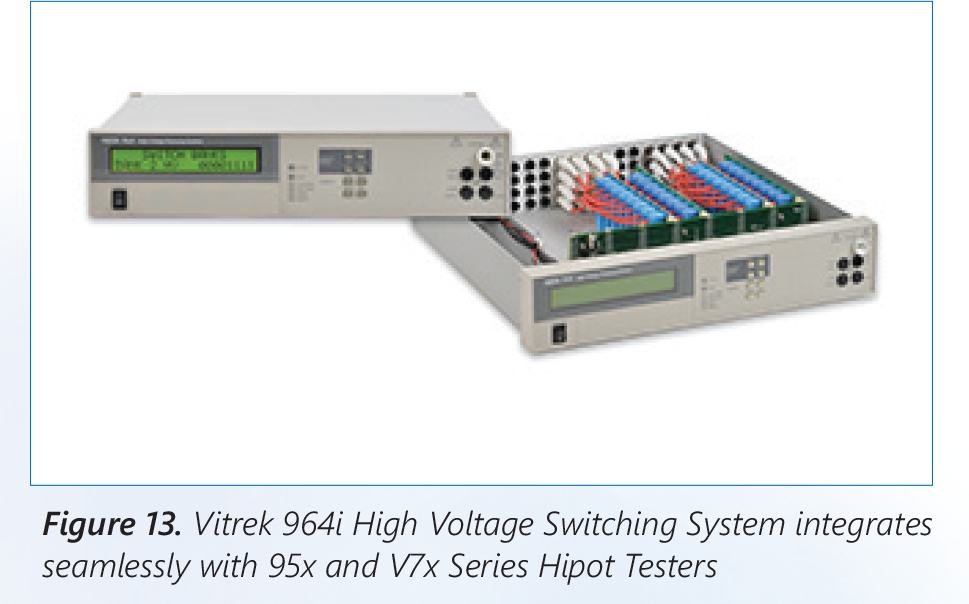 Vitrek’s 964i high voltage switching system (Figure 13), can be used with the Vitrek V7x and 95x series hipot testers during the final test phase of product production.

For example, on a production line making LED drivers, 10 Vitrek hipot testers can test up to 10 LED drivers at the same time.

Alternately, one Vitrek hipot tester can be used with a 964i high voltage switching system to test all 10 LED drivers. In this case, the switch will introduce the voltage from one hipot tester into the front panel. A series of relay boards, shown in Figure 13, will take high voltage and switch it to multiple points, so 10 relays can switch from relay 1 to 10 to test 10 different LED drivers very quickly.

Additionally, when used together, QT Enterprise software can configure the 964i switching system at the same time as the hipot tester, and saves the results for later use if audited or requested by customers.

Manufacturers and engineers are challenged with making sure their LED lighting products meet industry standards to pass UL, CSA, TUV, Intertek and other specifications. As discussed in this paper, Vitrek offers portable, easy-to-use equipment ideally suited for LED lighting testing during each phase of product development.

Vitrek’s PA9xx power analyzers have built-in lighting specifications for standby and harmonics standards, as well as display screens that toggle between a wide range of required parameters. Vitrek also offers the DL series digital DC electronic loaqd, the V7x and 95x series hipot testers and the 964i high voltage switch. All products are designed and manufactured in the USA and are designed to be capability-rich, portable and user-friendly.