Usually the conventional “box” type test equipment is fine for user interactive measurements. Or tests where measurements are relatively slow (less than 1000 readings/sec). But not well suited to cases where continuous real-time high-speed data flow (greater than 10 MS/s) to a host PC is required. This real-time requirement is easily met using measurement cards with a high-speed back-plane interface, as inside a PC.

With ever-increasing capabilities, current PC-based systems contin-ue to provide the highest performance, the best open and flexible architecture, and are the most cost-effective affordable platform for constructing real-time high-speed data acquisition systems. 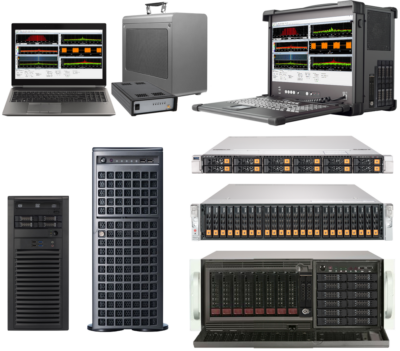 Most box type oscilloscopes are used by digital designers for R&D debug and development. As such, they are optimized for an interactive user interface, with large color displays and extensive front panel functionality. The typical 8-bit oscilloscope resolution is a good fit to view digital data on a linear amplitude display.

However, most models are limited in their memory capture depth. They are usually optimized for screen viewing speed, so have excellent specifications relating to screen update rate in “waveforms/sec”. But that performance tradeoff frequently means transfer rates are relatively slow to external computers. The measurement transfer rate is usually limited by the USB or Ethernet connection to the host platform. And data is typically transferred in non-continuous blocks. High end oscilloscopes can be very expensive, with long option lists that can quickly add up to thousands of dollars per unit.

In contrast, PC-based systems can support high-speed  multi-channel PCI Express (PCIe) based digitizers.  These  solutions can provide the highest dynamic range data, very high-speed A/D sampling rates, with wide (> GHz) analog bandwidth.  But most important – within a platform that  supports high-speed storage systems, allowing for multiple terabytes of continuous signal data capture recording in  real-time.  In addition, embedded real-time digital signal  processing capabilities can be added either via onboard  FPGAs or GPU CUDA-based cards, and signal playback via added D/A generator cards.  All within a Windows environment for ease of control and data handling.

Most low-cost box type spectrum analyzers capture a large spectrum via swept tuning, or by capturing many consecutive frequency bands and piecing them together to form the larger spectrum image. One advantage of the swept tuned or narrowband capture method is the better spurious free dynamic range (SFDR) performance versus wider band capture systems. However, a significant disadvantage for many applications is that the frequencies on the display are captured at different moments in time.

For applications that require real-time capture of a large spectrum of interest, and need to record it continuously for analysis, most spectrum analyzers fall short. Like oscilloscopes, they are optimized for screen viewing, and most can provide only snapshots of data, rather than the desired real-time continuous wide bandwidth recordings.
In contrast, a PC-based system with integrated PCIe-based digitizers (A/D) can easily record wide bandwidths without losing any data. These solutions are ideal for baseband or IF signal data capture. The full wideband spectrum can be captured, displayed, and recorded to high-speed integrated storage continuously with no breaks in the signal data record for multiple hours of recording.

Most boxed-based signal generators are useful for playing very simple and repetitive waveforms.

The key technology in enabling real-time high-speed data ac-quisition systems on PC-based system platforms is the Periph-eral Component Interconnect Express (PCIe) standard. PCIe is a high-speed serial based interface where each “lane” of a PCIe connection contains a transmit and receive pair of differential lines that form two serial channels capable of transporting data packets in both directions simultaneously between device link endpoints. Peak data throughput scales with multiple lanes as packet data is striped across them.

As shown in Figure 2, each generational implementation of the PCIe specification has doubled the maximum data transfer rate speed of the prior generation, while fully maintaining backward compatibility with all previous generations. 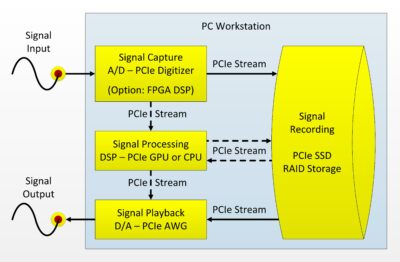 These very high-speed PCIe based interface connections thus allow for the creation of real-time data acquisition systems by integrating targeted PCIe based instruments as shown in Fig. 3.

To maximize the sustained data transfer rates of operating multiple devices simultaneously, careful attention should be noted regarding:

On modern PC-based platforms, PCIe lanes are allocated from the system processors (CPUs) or from the system Platform Controller Hub (PCH) chipset to provide PCIe expansion slots for add-in card devices, add-in storage devices, or to facilitate onboard external device interfaces such as Thunderbolt, Ethernet, USB, audio, etc. as shown in Figure 4.

Ideally it is best to maximize PCIe resources that do NOT share data bandwidth with other devices on the system platform as represented in the green colored block items shown in Figure 4.

In contrast, Desktop class CPUs and platforms with a lower amount of dedicated PCIe resources will allocate PCIe slots and resources supplied via the system PCH and with added PCIe switches as represented in the red colored block items shown in Figure 4. Caution with these resources is warranted as all devices connected via the platform chipset shares data bandwidth to the CPU and with other onboard devices (Ethernet, USB, SATA, etc.) that may negatively effect the maximum data transfer rates.

PCIe switches may also be problematic in that PCIe resources that are behind a switch will typically auto default down to the lowest common PCIe device type. Therefore a generational mix of PCIe devices behind a switch can negatively impact data transfer rates. For example, if there is a PCIe Gen3 device and a PCIe Gen1 device installed together behind a PCIe switch, then the Gen3 device will auto-downgrade to a Gen1 rate to match the PCIe Gen 1 device due to their shared connection via the switch to the system platform. Switches can also be implemented such that if only 1 slot is populated it may run at up to maximum x16 rate, but if 2 slots are populated then each device may only run up to maximum x8 rate each and so forth. 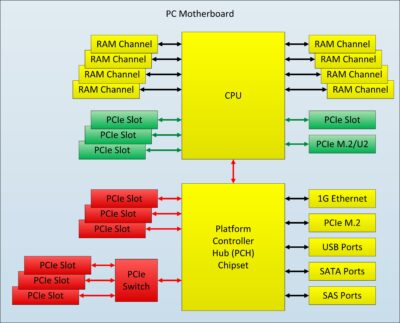 Just as with PCIe add-in cards, PCIe based storage devices for high-speed real-time operations are best maximized by utilizing PCIe lanes allocated directly from the CPU(s) to not share data bandwidth with other system devices.

When selecting a system platform for high-speed real-time operations, one should consider the targeted application requirements with the total number of PCIe instruments and the effective data transfer rates to be sustained for each device operating simultaneously to ensure that the system platform can provide sufficient PCIe resources to support it.

The functionality of traditional boxed-based test equipment can be supplied in PCIe based form factor card instruments for an integrated system solution. As shown previously in Figure 3:

Yet PCIe based instruments can transfer data at significantly faster sustained rates making them much more suitable for high-speed real-time applications as compared to boxed-based test equipment that are limited in data transfer rates to a host system by their external interconnection (typically via USB or Ethernet).
When selecting PCIe instrument devices, one should consider the following factors:

Not all PCIe devices support PCIe streaming operations. Many PCIe devices simply have a PCIe interface for means of supporting power for the device and for conducting basic transfers to the host system. By basic transfers, we mean moving data after the fact of initial operation is completed. For example, a PCIe Digitizer may have onboard memory used for the A/D capture operation; the capture is performed and then stopped and the data residing in the Digitizer onboard memory may then be copied to the host system.

This differs from a PCIe streaming operation where data is continually operated on while simultaneously being transferred to another target device. For example, a PCIe Digitizer continually acquires data on it signal inputs while simultaneous-ly streaming the A/D captured data over the PCIe interface to high-speed storage for signal recording of the data in real-time until the entire operation is stopped.

PCIe instruments supporting streaming operations typically utilize a minimum dual-port architecture of its onboard memory to be able to acquire data to onboard RAM while simultaneously transfer the data from onboard RAM to the PC by interleaving write and read data packets. When in this mode, the onboard memory is effectively utilized as a large FIFO providing ample data buffering between the device and the host PC. Data is transferred efficiently through the PCIe interface to the host PC system memory using high-speed DMA transfer mechanisms and circular memory buffers that make it possible to achieve high performance real-time sustained streaming operations within a non-real-time operating system such as Windows.

While a PCIe Instrument device will feature a specific PCIe generation and lane size type interface, it does not necessar-ily mean it will support the maximum data rate bandwidth of that touted specification. There are several factors that can potentially impact the true sustained data streaming rate of a PCIe device which include the maximum internal bandwidth of the front end of the device to its onboard memory, the size and architecture of its onboard memory, and the capability and architecture of its PCIe interface.

Therefore, it is important to check with the device manufacturer to determine if PCIe streaming mode is supported, and if so, what is the true maximum sustained data streaming rate that it can support to the host PC system.

The advantage of the open PC-based system platform is that it allows the capability to mix and match a variety of instruments tailored for a specific application requirement with very high-speed data transfer rates via the PCIe interface for real-time signal-based solutions.

Unlike traditional boxed-based test equipment whose functionality is set and non-upgradeable, the modularity of a PC-based system platform allows for flexibility of future modification or upgrade capability without having to replace the entire system.

By leveraging the latest COTS (Commercial Off The Shelf) computer components, engineers can design and deliver best-of-class high-performance real-time systems with typically less development time and less cost than closed proprietary based systems.